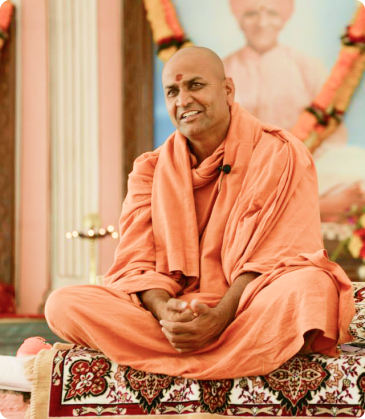 The one is worshipped, who practices what one preaches

Pujyashri Adrushya Kadhsiddheshwar Swamiji took on the mantle as the 49th Mathadhipati in 1989. He has been the chief architect of holistic programmes held by Siddhagiri Math in the areas of healthcare, education, village development, agriculture and heritage in order to develop Aatmanirbhar (a self-reliant) society.

1991 onwards, Pujyashri decided to work for uplifting the marginalised in the society and for this purpose, he made Kaneri, a nearby village, as his 'Karmabhoomi'. Soon, a number of young minds got attracted towards Pujyashri and his teachings. Pujyashri convinced the youth that they shouldn't be depending on government aid to solve the issues being faced by their village. Instead, they should take the reins in their own hands and work for themselves. Pujyashri led the local youth to the path of self-reliance.

Swamiji’s vision to the betterment 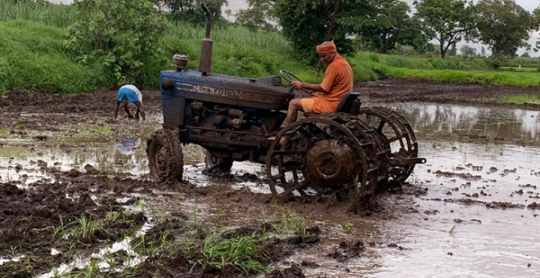 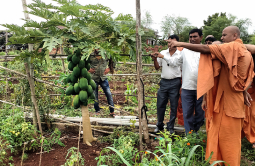 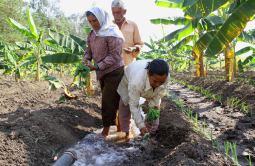 Pujyashri quotes “Nation Breathes when Farmers Survive.” A Healthy Nation and a Prosperous Farmer will lead to an economic growth of the country. To achieve this goal, Organic Farming is the only sustainable solution. Pujyashri has travelled the length and breadth of the country to guide many farmers across the country. This has resulted in not only providing consumers toxin-free food but also improving the fertility of Mother Earth. By this, the income of farmers has also significantly increased. He introduced the concept of 'Lakhpati Sheti' (A lakh income from 1 acre land) which is a promise of prosperity for marginal farm holder families. A recent initiative, 'Siddhagiri Naturals' has been nurturing farmers to grow manifold organic products and thereby increasing the earnings and creating no. of job opportunities.

Pujyashri strongly believes that native breeds of Indian cows are the core to organic farming and therefore, they should be conserved at any cost as they offer the long term health benefits to mankind. Typically, farmers sell their cows to slaughterhouses on the pretext of ‘unproductivity’ of these breeds. To shelter such cows, Pujyashri established ‘Gau Shala’ (Shelter for Cows) and showcased how to achieve a compounding effect and transformed this initiative into a viable project. Currently, Gau Shala houses over 1000 cows of about 25 indigenous breeds. For promoting the significance of indigenous cow breeds, Pujyashri took initiatives like Gau Kumbha (Cow exhibition) and Gau Yatra (Cow Awareness Campaign). Inspired by these events, farmers across the country have started rearing the indigenous breeds. 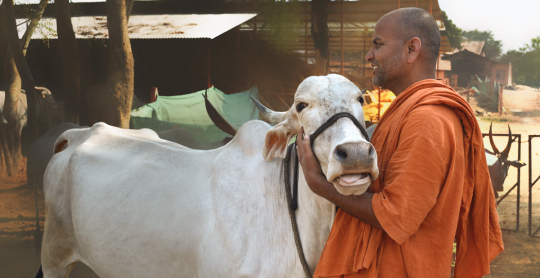 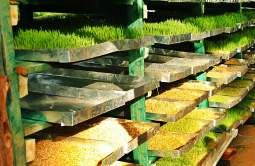 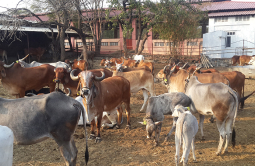 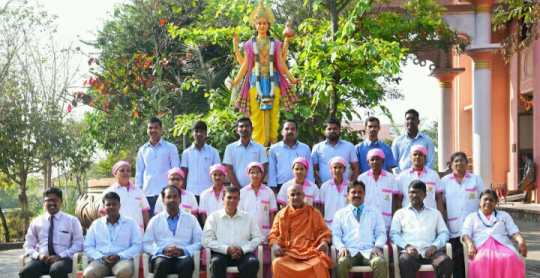 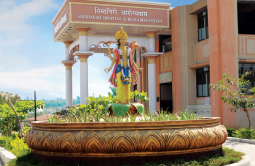 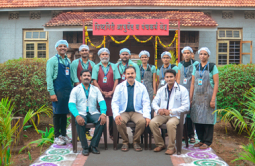 With the vision to address healthcare requirements of people living in rural areas, Pujyashri dared to dream of extending a helping hand to the helpless and built Siddhagiri's healthcare facilities like, Siddhagiri Hospital and Research Centre and Siddhagiri Ayurdham. Both the facilities are acknowledged as premiere healthcare institutions with the mission of providing all the modern healthcare amenities to 'ALL' at affordable cost or no cost.

Today's education system has lost the nexus with our ancient 'knowledge tradition' which was rooted in building characters of the student. Gurukulam was established with an aim of cultivating Indian values among the students. The First of its kind educational initiative in India where 400+ students, as a part of residential program are pursuing and cherishing the learning experience.

To bring children with weak socio-economic backgrounds into mainstream education, Anadashram was established. Children from all over India are gaining the residential and educational benefits. 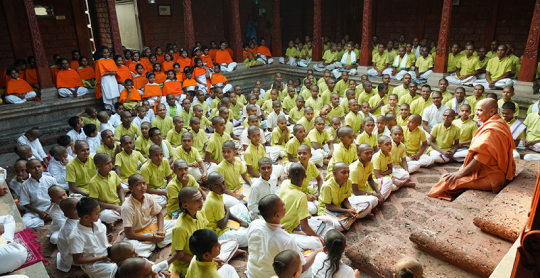 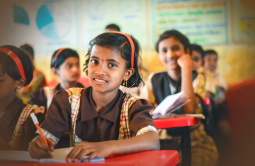 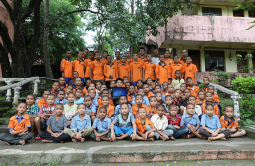 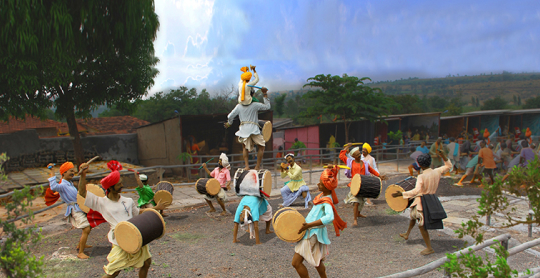 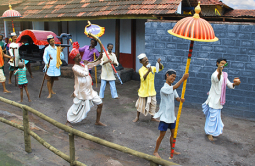 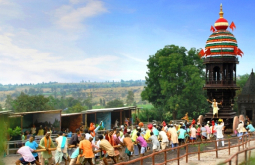 Heritage and culture are the pillars of a civilised society. To acquaint the present generation with the self-reliant way of rustic life, Pujyahri developed the Siddhagiri Museum. The sculptures representing Balutedars, Alutedars, Vedic sages and Indian festivals aim to ’re-invent’ the traditions for the visitors. The museum, considered to be one of the best in Asia, is the main tourist attraction at the Matha.

All these initiatives constitute a self-sufficient village which ultimately leads to a self-sufficient nation. These initiatives are recognized as role models across the country. People visit math to learn and adopt these models. Swamiji is invited as a Guest Speaker to various events held across the nation to enlighten the masses about his own experience executing these initiatives. Swamiji has taken up the responsibility of nationwide social welfare, guiding youth to walk on the path of self-reliance – thus becoming Pujyashri for the entire nation.

In 2014, Pujyashri organised ‘Bhartiya Sanskriti Utsav’, a festival that brought together a number of institutions as well as individuals working for the cause of sustainable development.

Throughout the journey, Pujyashri has always believed in shaping up the human minds who would commit themselves in a selfless manner. He has always turned his back on communal discord in blatant disregard and encouraged symbiotic living. Upholding this philosophy, in 2014, Pujyashri organised ‘Bhartiya Sanskriti Utsav’, a festival that brought together a number of institutions as well as individuals working for the cause of sustainable development. Vidyachetna project is a result of exchange of ideas during such gatherings. Pujyashri has been working relentlessly to build the generation who would take efforts and pride in understanding and loving the Hindu cultural ethos. He is always engrossed in creating enlightened minds who would have a precise understanding of the religions. He has always laid emphasis on channelizing the energies towards constructive and creative work. He believes in transforming every unfavourable situation into an opportunity. He faces every challenge of life as ‘Prasad’ which he thinks should be accepted with all humility and grace. Pujyashri firmly believes that a human being should always endeavour to live his life with gratitude towards the Almighty. Pujyashri himself has always practiced what he preached and worked tirelessly and selflessly towards creating a meaningful form of life for everyone. He considers the Sanyasgrahan is his ultimate award for lifetime and hence he does not accept any award from anyone.

Whatever is Drushya (visible Siddhagiri srushti) is the incarnation of affection of devotees towards Pujyashree. Pujyashri truly remains ‘Adrushya’ as per his name, yet there, very much ‘Drushya’ among all of us! 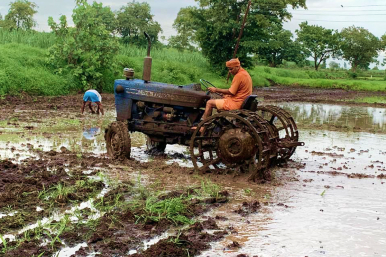 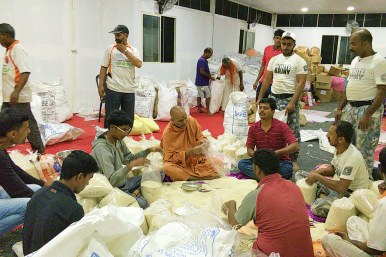 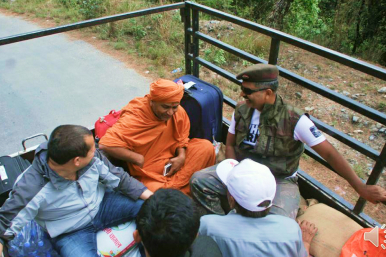 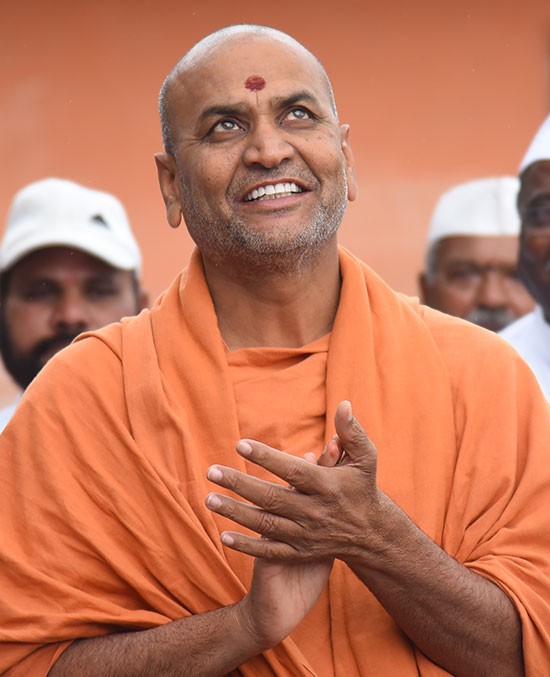 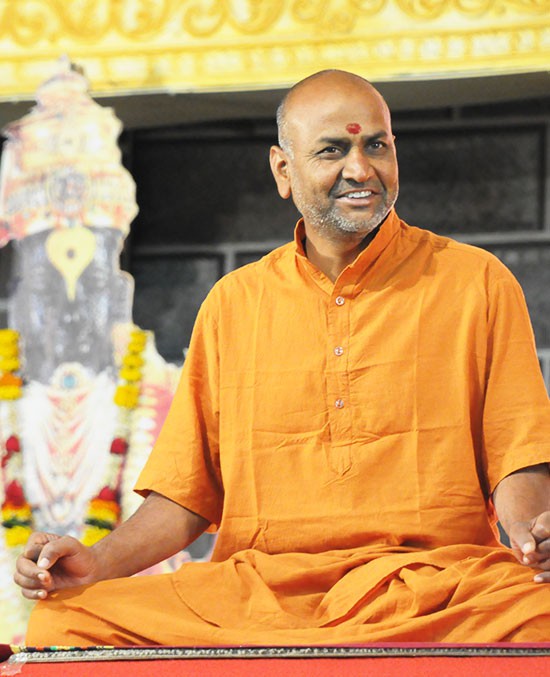 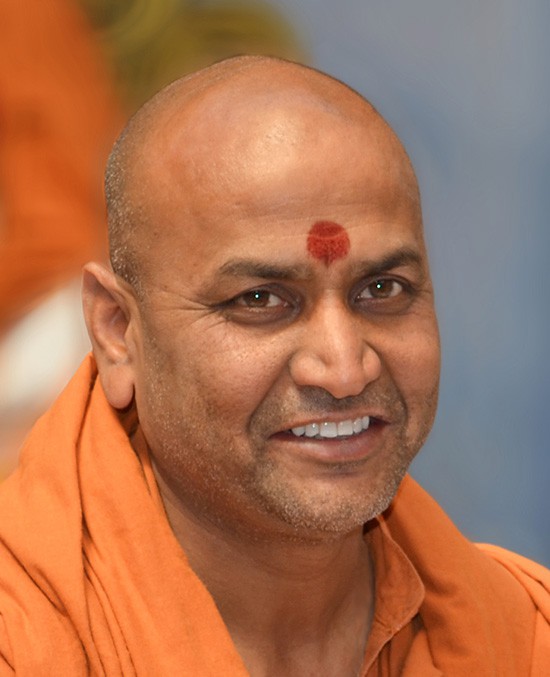 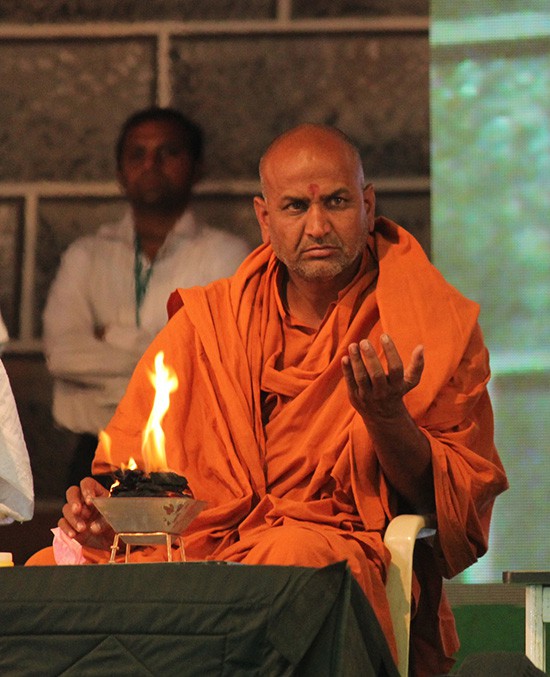 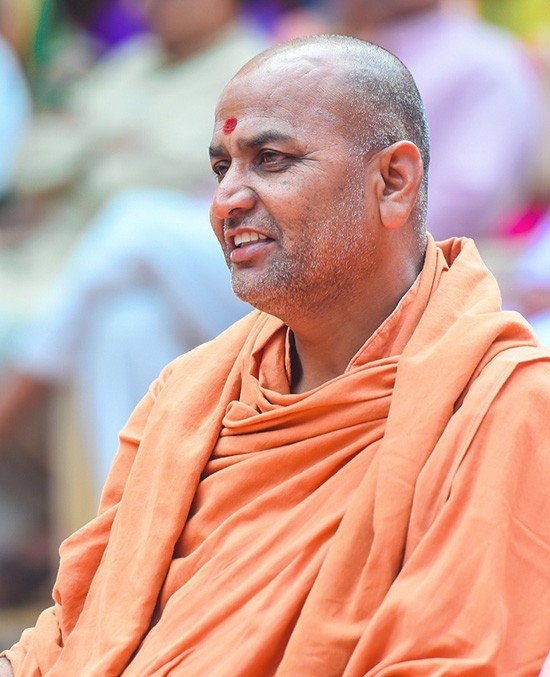 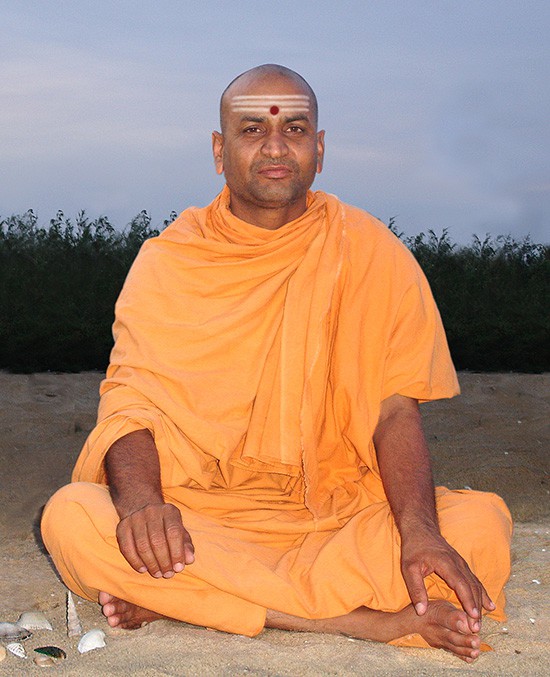 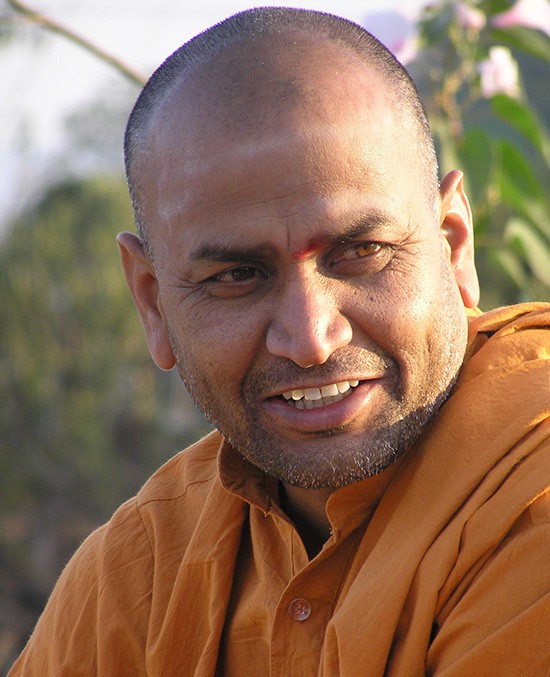 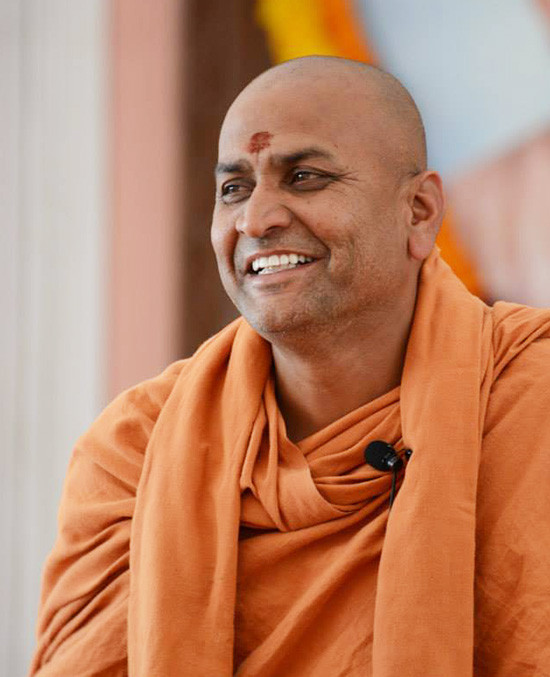 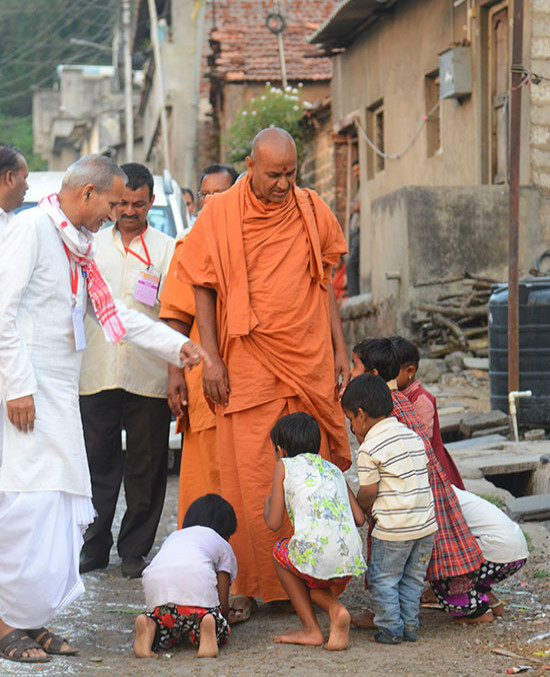 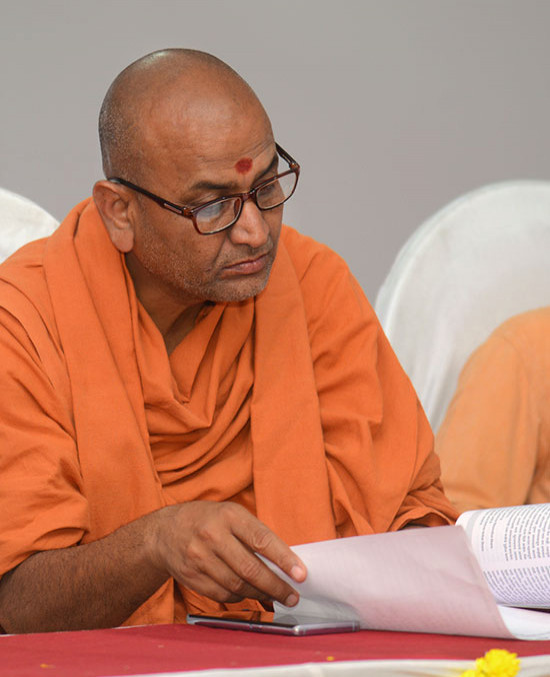